Learn to move your first steps with the PostgreSQL console with this cheat sheet. 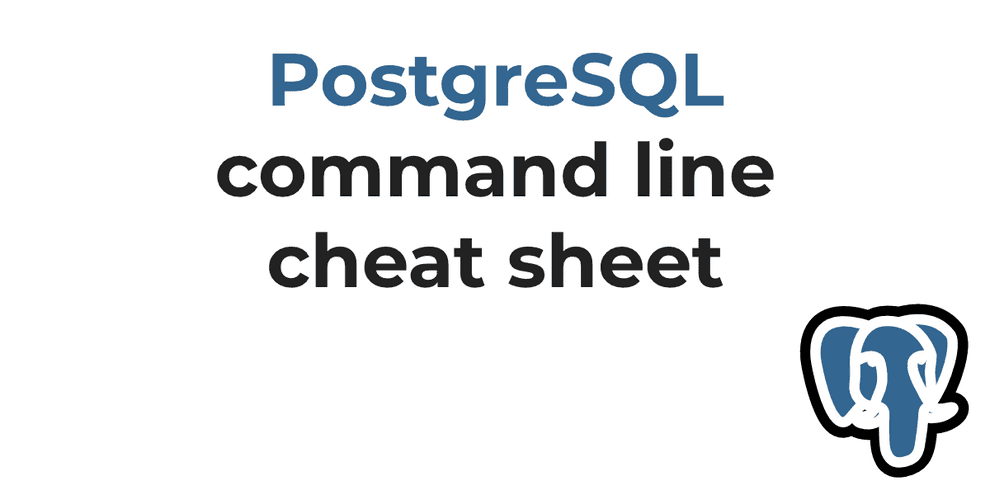 PostgreSQL is a fantastic database isn't it? However for all those starting out, PostgreSQL console could be confusing to say the least.

Let's see in this cheatsheet what are the basic commands for moving your first steps it the PostgreSQL console.

First of all you want to login into the console. To do so become the user postgres from the command line with:

Once inside enter the PostgreSQL console with:

If you use Postgres.app for MacOS, from the terminal you can run psql followed by the default database name:

If you see this prompt you're in:

Once inside the PostgreSQL console you can interact with databases. From now on I'll omit the prompt postgres=#. To create a new database:

In addition to the shortcut there is also the extended version:

To delete a database (warning zone):

To connect to a database run:

and you should see:

Note that outside the PostgreSQL console you can also create a database with createdb:

Once connected to a database you can list all its tables with:

This command will give you a representation of all the tables in the database:

My example assumes a simple database with two tables connected through a many to one relationship. To describe a table, that is, to see its columns, run:

This command will give you a complete description of the table:

You can see every column in the table with the corresponding type. If there is any primary or foreign key you'll see them as well.

Database users can interact, modify, update, and see databases. In PostgreSQL they're called roles. To create a new user from the PostgreSQL console run:

PostgreSQL roles may own one or more database. Once you create a role you can assign an entire database to it:

If you want to give a user the ability to create new databases, run:

When you're done with databases, roles, and tables you can finally exit the console with:

It's common when migrating between systems to migrate first the application code, fetch the database from the old system, and load it in the new environment.

With pg_dump you can dump a remote database to the local environment. To do so, set the PGPASSWORD environment:

Then, use pg_dump to dump the remote database on the local machine:

To load the dump on the new machine, create the database and then run:

The PostgreSQL console has a lot more commands, and there are also a lot of SQL instructions in the PostgreSQL dialect. To see the complete list of all the SQL command available in PostgreSQL you can run:

To see a complete list of PostgreSQL command run: