Learn how to use Django Q for offloading asynchronous tasks in your Django applications. 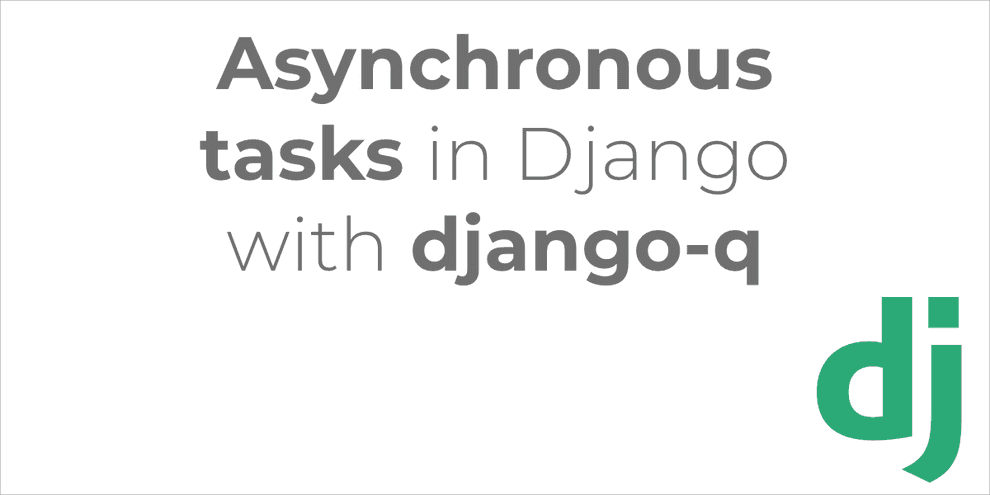 Deployment on Heroku is optional, and you can use your own Redis instance if you've already got one locally.

And now let's get to work! To start off we're going to create a new Python virtual environment alongside with a Django installation:

Next up we're going to create a new Django project from a template:

If you're wondering what I'm doing here, this is a template of mine. I've got a link in the resources with a tutorial for creating your own Django project template.

We need also to provide some environment variables for our project:

The template uses PostgreSQL as the default database. To use Sqlite (not recommended) open up django_q_django/settings/development.py and change the database configuration to:

at this point you should be able to run the development server:

Now before moving to Django Q let's see what problem is it meant to solve.

Asynchronous tasks in Django with Django Q: the problem with synchronous code

The main issue for Python and Django is that they're synchronous. It's not a bad thing per se, and there are a lot of ways to circumvent it.

Python, on which Django builds on, is single threaded by nature. Single threaded means that the language interpreter can only run your code in sequence.

The practical implication is that any view in a Django application can get stuck if one or more operations take too much to complete.

To demonstrate the concept let's create a new Django application inside our project:

In this app we're going to define a view which returns a simple JSON response:

Don't forget to wire up the url for the new app:

And finally activate the app:

Now to simulate a blocking event in the view we're going to use sleep from the time module, part of the Python standard library:

Now, this is a delay created on purpose, but in a real application the block could happen for a number of reasons:

Even if it's a contrived example you can see why it's crucial to offload long running tasks in a web application.

Django Q was born with this goal in mind. In the next sections we'll finally put our hands on it.

If you like watching videos here's the first part of this tutorial:

How about asynchronous Django?

We're left with a Django project, a Django application, and a view that remains stuck for 10 seconds!

It's not that Django and Python don't scale. There are a number of ways to get around single threading.

For Python there is asyncio. Django instead moved to async only recently, the implementation is in its infancy and still there's no support for async views.

Things are going to change in the future, I suggest staying tuned on Andrew Godwin because it's the lead person for the async story in Django.

But the need for third party queues won't go away anytime soon even when Django will go 100% async. Still a nice skill to have.

Preparing the Heroku app and the Redis instance

In this section we'll prepare the Heroku project. I'm using Heroku here because you may want to deploy to production later, and also because they offer the Redis add-on for free.

If you're new to Redis, it's an in-memory database, can be used as a cache and as a message broker.

A message broker is more or less like a post office box: it takes messages, holds them in a queue, and folks from around the city can retrieve these messages later.

If you're interested in how Django Q uses brokers check out this page.

Still in the project folder initialize a Git repo:

If you haven't got the Heroku CLI and an Heroku account go create one, install the CLI and come back later.

Otherwise follow along with me and create the app:

Once done give Heroku a couple of minutes and then run:

This command will reveal REDIS_URL, an environment variable with the credentials for the Redis instance.

Take note of it and head over the next section!

Let's install Django Q and the Redis client library (the client is needed by the Redis broker for Django Q):

Once done activate Django Q in the list of installed apps:

After the @ there's the host:

And 9059 is the port. Note that the credentials will be different for you, don't use mine!

(Needless to say, by the time you read this article these credentials will be gone.)

Now configure Django Q in django_q_django/settings/base.py with the Q_CLUSTER dictionary. Fill host, port, and password with your credentials:

You might wonder why I'm not using REDIS_URL as it is. The reason is that Django Q wants credentials in a dictionary.

It was a limitation of Django Q, I opened a pull request which got merged, and now you can use a Redis url:

(When running the project in production you may want to switch to using environment variables. See the base configuration for learning how to use env).

Once you're done run the migrations (Django Q needs to create its tables in the database):

At this point you're ready to run the Django Q cluster with:

If everything goes well you should see this:

Well done! In the next section we'll create our first asynchronous task.

What is the Django Q cluster? Check this out.

If you like watching videos here's the second part of this tutorial:

Worth doing a quick recap of what we covered so far:

To test that Django Q could connect to Redis I launched:

With the project in place let's finally see an example of Django Q in action. Remember your view?

Remove the time import and create a new file in demo_app/services.py (the name of this file is totally up to you).

In this new module we're going to define a function, sleep_and_print:

In the view instead we'll borrow async_task from Django Q:

async_task is the principal function you'll use with Django Q. It takes at least one argument, the function's module that you want to enqueue:

The second group of arguments instead is any argument that the function is supposed to take. sleep_and_print in our example takes one argument, the seconds to wait before printing. That means for async_task:

That's enough to enqueue a task. Let's now mix our view with async_task.

Back to our view, with async_task imported, call it right after the return statement:

Now you should notice a couple of things. The Django dev server should log:

The Django Q cluster should log something along these lines:

And after that you should see: 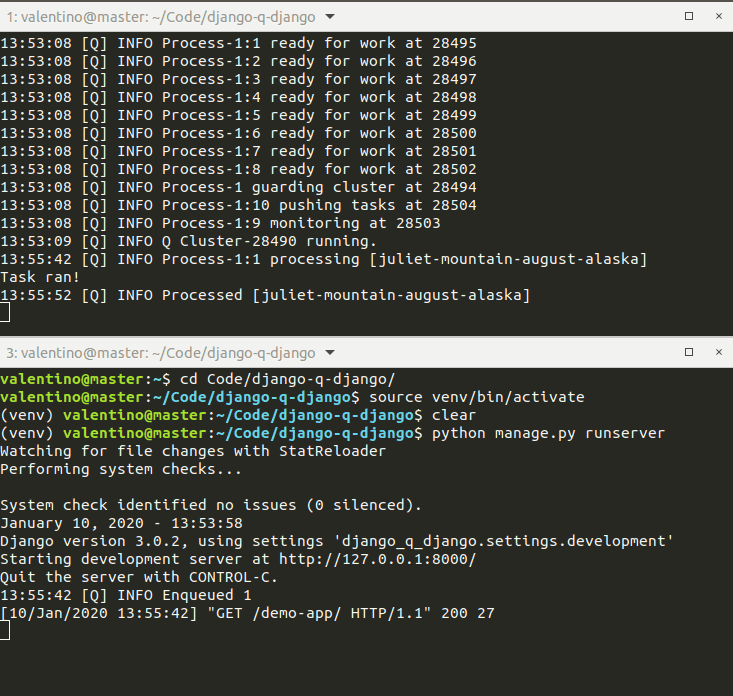 What happened here is that:

With this "architecture" the view does not remain stuck anymore. Brilliant.

Think about the use cases for this pattern. You can:

Watch the third part of the tutorial with an example of API call:

Asynchronous tasks in Django with Django Q: what's next?

In addition to async_task Django Q has the ability to schedule a task. A practical use case is do X every X days, much like a cron job. Or think about an on-boarding series of emails that most services send to a newly registered user.

Check the documentation to learn more.

Django Q supports other brokers in addition to Redis. Again, the docs are your friend.

Another neat feature of Django Q is the admin integration. Create a super user for your Django project, log in into admin, and you'll find all your tasks and schedules there.

If you don't need other brokers than Redis, django-rq might be a lightweight alternative to Django Q.

A practical use case: sending an email when a new model instance is created

To illustrate Django Q schedules we're going to create a new model named Person. This model has nothing to do with the Django user model and it's just for illustrating things out.

Let's say that when a new Person instance is created we want to send out an email every day. First let's create the model in demo_app/models.py:

The model will hold a reference to the corresponding schedule. Don't forget to make the migrations and to migrate:

Now with Django Q schedules, which are available also as models, we can wire up the app so any time a Person is created, a new schedule is registered in Django Q (we could use schedule as a function, but in this case the model comes handy).

There are many ways to model this relationship. I could have used a one to one, but I don't feel that Schedule "is a" Person. Instead we're going to override save and delete on the Person model so that:

Let's start with the saving phase (notice that I'm importing the Schedule model from Django Q):

From now on any new Person will also have a related Schedule. To send out the email you can create a new function named send_email in demo_app/services.py:

And now here's the model with the deletion phase:

The Schedule associated with Person is deleted with Schedule.objects.get(pk=self.schedule_id).delete().

Asynchronous tasks in Django with Django Q: why not Celery?

Fun fact: Celery was created by a friend of mine. We were in high school together. Despite that I don't have much experience with Celery itself, but I always heard a lot of people complaining about it.

Check this out for a better perspective.

Note: these instructions assume you're using the same Django project template from the beginning.

Note: keep in mind that free Heroku apps sleep after inactivity. Your cluster might stop running.

Before deploying to Heroku make sure to add a worker in the Heroku Procfile for starting the cluster:

Copy the example .env.prod.example to .env.prod. Add the environment variables for Redis to keep things cleaner in production (these are the same credentials you got from Heroku):

Now configure Django Q in djangoqdjango/settings/base.py to use the environment variables:

To set the new environment variables on Heroku run:

Wait for the result. If everything goes well commit all the things and push to Heroku:

Wait for the deployment. Then enable the worker on the app with (warning: this is not free!):

This will enable the worker capability and the Django Q cluster will start. To confirm that everything works run:

This opens the logs for your app. Now in another terminal run:

In your terminal you should see something along these lines:

It's a sign that the view is responding fine and the asynchronous task ran successfully.

Congrats on finishing this tutorial!